The Title Business, Then and Now

In 1920, my grandfather began working in the title business for a company called Title Insurance Corporation of St. Louis. He was mentored by McCune Gill, who was eventually named president of the American Land Title Association in 1937. My grandfather, Morris Holden went on to open his own agency and sell title insurance through his working career in St. Louis.
I was telling this story to a title agent in Ohio last month and he asked a question I had never thought of before: “Do you think your grandfather would recognize this business today?” Honestly, I am not sure he would with all the changes that have happened since 1920. So in that vein, I put together some of the major changes from the title business in 1920 and 2011, take a look:

In 1920, most title insurance companies were local or statewide only. They all used their own forms, it was not until efforts by life insurance company counsel meetings with the land title industry that a standardized mortgage policy was created. Mortgage lenders who were making loans in many jurisdictions were spending a fortune on reviewing clauses and terms of individual company policies. This first standardized policy was call the LIC mortgage policy (or Life Insurance Counsel Mortgage Policy). My grandfather first worked with policy forms created by his employer and then when he owned his own agency in 1937, he worked with the LIC mortgage policy. Today we have standardized policy forms and endorsements. Understanding the forms and their technical terms is nothing like it was in the 1920s.

Of course the closing of land transactions has been part of the land title industry for a long time. In 1920 title companies in major metropolitan areas did perform closings. Where allowed, title companies prepared deeds and other documents for real estate transactions. However in 1974 the United States Congress created the Real Estate Settlement and Procedures Act. This act empowered the Department of Housing and Urban Development to standardize closing statements for all federally insured mortgages and set rules and regulations for their use. Closings drastically changed in the 1970s and 1980s. Closing packages today can exceed 200 pages. Closings are more complicated and represent the most significant area of loss for underwriters. In 1920, closings were simple: an exchange of a deed and exchange of money. A simple one page closing statement was all that was required.

Technology has changed our lives in many ways. We can think of that computer you use everyday or the cell phone you use to talk to your customers. In 1920 – operations did not have such technologies. Sending someone a message was done by US Postal Service. Mortgage lenders would attend closings in person to have their documents signed. Phone service was done by local exchange and long distance calls were seldom used. Title searching was done in the courthouse with voluminous handwritten ledger books. Today technology allows us to perform such searches from our desktop computer over the internet. We can send messages instantly via email to any part of the wired world. Federal Express and the invention of overnight delivery at a reasonable cost has accelerated the speed in which we communicate.

One of the biggest changes in the last 90 years has been the evolving landscape of risk management. In 1920, it was common at a closing to sign the papers and the customers sat and waited in the office while a runner took the documents to the courthouse for recording. When the runner came back and said “ok, you’re of record” the monies were disbursed. How many times do we disburse before recording is completed? In 1920 survey coverage was never given unless a full survey was completed and examined. Today, it is standard on 1-4 family residential mortgage policies. In 1920 there was an extra charge for mechanics lien coverage, sometimes as high as $3.5 per thousand. Today mechanics liens are insured as part of the regular premium or extended coverage charge.

All these changes have made profound differences in our industry. Would my grandfather recognize this business today – my answer is in some ways yes and in some ways no. The title agent is still the central practitioner affecting the safe and efficient transfer of land between buyers and sellers. Realtors®, Lenders and Attorneys still look to us for our title expertise. Buyers rely on us to protect and defend them from title claims. The forms, technology, laws and what we insure may have changed, but the job we do helping homeowners achieve the American dream is still the same.

“THE MORE THINGS CHANGE, THE MORE THEY STAY THE SAME” 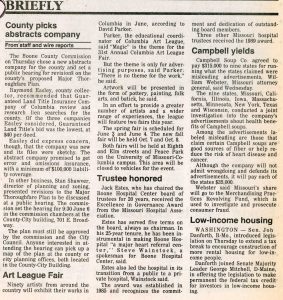